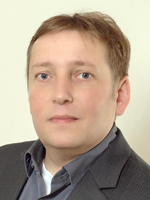 Q1. Please introduce yourself and your lab.

My name is Sven Behnke. I am heading the Autonomous Intelligent Systems lab at University of Bonn, Germany. My lab develops cognitive robots for complex domains, such as domestic service tasks, humanoid soccer, and aerial mapping and inspection.

Q2. Please tell us a little bit about SpaceBot Cup and its tasks.

The DLR SpaceBot Cup was a robot competition hold by the German Aerospace Center (DLR). Ten teams from German research institutions participated. The tasks consisted of exploration and mobile manipulation in rough terrain. The robots were constructed by the teams and could be configured from an operator station over a delayed data link, which was enabled only for few minutes. One of the difficulties was that the robot could not be tested in the environment prior to the competition run. 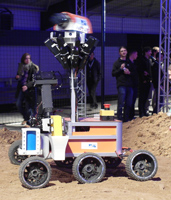 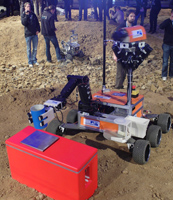 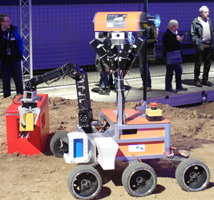 Q3. What was the most difficult moment during the competition?

The most difficult moment was when our robot did not continue to fulfill its mission after finding and picking up one of the objects due to a crash of the laser scanner driver. 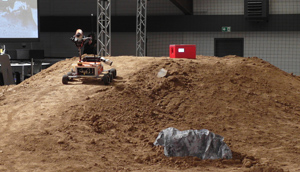 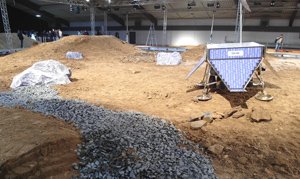 Q4. Why did you select the Dynamixel Pro for Explorer? What do you think are the PROS/CONS?

Q5. The video on YouTube says, Explorer was the only robot that demonstrated grasping of an object.What is the characteristics of the new gripper?

The gripper is driven be Dynamixel MX-106 actuators. An additional rotational joint has been added between the arm and the gripper in order to enhance the possible gripper orientations. 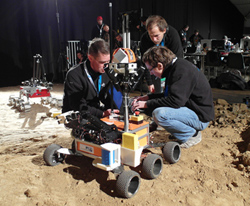 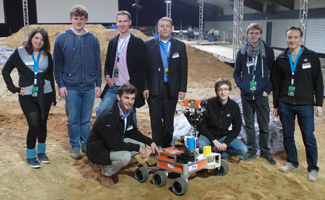 Q6. If the MX and DXL Pro were both used in Explorer, please share how it was connected and what type of software environment was used.

MX actuators have been used for the wheels, in the gripper and to rotate the laser scanner. We used self-developed software and the ROS middleware to control the robot. Functionality includes 3D mapping of the environment, self-localization, traversability analysis of the terrain, global and local navigation, object pick-up and placement.

Q7. Do you anticipate Explorer to really go into outer space in the future?

No, the current robot is not suitable for space application. Further research is needed on earth before space-capable robots for mobile manipulation in rough terrain can be developed.

For me, robot means moving machine with sensing and some autonomous functionality.

I am in particular interested in intelligent functions, such as environment perception, navigation and manipulation planning, and learning.

Click here to read more about this team : http://www.ais.uni-bonn.de/nimbro/Centauro/