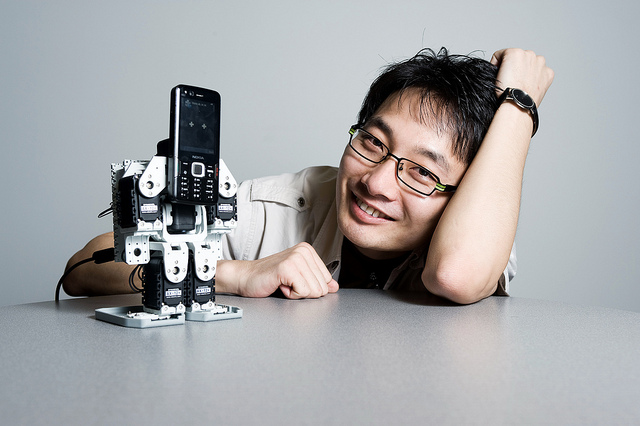 School of Interactive Arts and Technology

Just earlier this month, NOKIA launched their new ad with a robot cell phone made by JD Yim. We ask him how everything came about.

“The robot cell phone project “CALLY” was proposed in 2007 and officially initiated in 2008 by Ji-Dong Yim and Dr. Chris D. Shaw at SimonFraserUniversity. Our research team has presented two robot creatures, CALLY and CALLO. The goal of the study is twofold. First, we are interested in suggesting development of robotic tools that help people communicate each other. Second, we aim to explore the design spaces in which robots can exhibit human-like social skills thus become emotionally interactive. Such a research field defines social robots (also called sociable robots or socially interactive robots). We have found that the mobile phone technology has a lot of possibilities for social robots in near future. So, CALLY and CALLO were implemented based on mobile phones from Nokia. An advertisement company, Wieden + Kennedy, based in London visited our research blog (http://cally.iat.sfu.ca/) and YouTube channel (http://www.youtube.com/imjidong/), and contacted us to collaborate for a Nokia campaign early in 2010. W+K and Nokia were looking for “crazy” things done with their products, and CALLY and CALLO did the job.”

Here’s a peak at what the developing environment and the difficulties encountered while making Cally and Callo.

“CALLY and CALLO run on the Symbian OS (Operating System). We used J2ME and C++ in Nokia N82 (S60 3rd platform) to develop the robot brains. In the future, the S60 5th edition and Symbian^3 will be used for further functionalities. It took time to figure out the connection between the phone and CM-5. We replaced the Zigbee module with a Bluetooth transceiver. The C++ source code is now open to public at our blog (http://cally.iat.sfu.ca/). Technical details are described in our publication titled “Development of Communication Model for Social Robots based on Mobile Service” in the proceedings of IEEE SocialCom 2010 conference.” 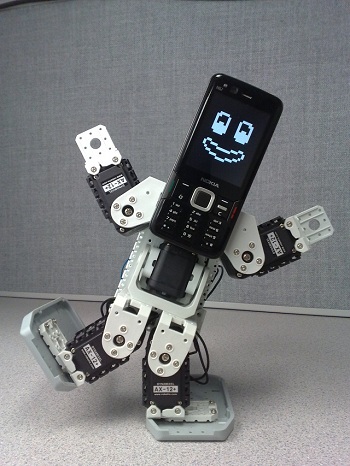 What type of signals are there that we can get from cellphone OS?

"It depends on the openness of a phone OS. In most cases, it is easy to access Multimedia files, GPS and Wi-Fi features. Some mobile OSs have very strict development policies for phone native services such as Telephony, SMS, and Phonebook, as the services can possibly cause serious problems if they are abused."

What does ‘social robot’ mean to you?

"Early in the history of robotics, social robots were regarded as the opposite of individual robots. Social robots at that time were more like collective robots which mimic living activities in organized communities, as ants, bees, wasps, or termites do. Recent definition of social robots in Human-Robot Interaction (HRI) refers to the robots that communicate with human users by using human-like conversation skills e.g. spoken languages, facial expressions, body gestures, and so forth. More details about social robots are presented in Dr. Terrence Fong’s publications (see the article titled “A survey of socially interactive robots” published in 2003)."

"A lot of limitations still exist for robots to be widely used in everyday lives. Many HRI researchers have been addressing the problem. Some roboticists study on “universal” and “autonomous” robots that can survive in real world environments. Others make “functionally designed” robots (also see the Fong’s publication). Technology is not enough for now. But let’s have our fingers crossed. Robots are knocking on the door to come into our lives."

Your future plans? Smart phones have many functions. How will you come about using smart phones in your robots?

"There are huge design space for both mobile phones and robots. Many of what used to be done by a computer are already or will soon be possible by a smart phone. For example, camera apps can automatically detect smiling human faces. Some phone devices support voice recognition and/or voice synthesis functionalities. "

How do you see the robot market in the coming years and how do you hope it changes?

"Considering that personal computer industry once had successful market ancestors e.g. devices targeted for games and digital printing, it is believed that one or more killer application areas of social robots will be discovered long before the technology advances enough to allow autonomous personal robots around us. People use robots for cleaning chore. People will have robots for simple everyday tasks soon. Then robots will change our lives as personal computers, the Internet, and mobile phones did." 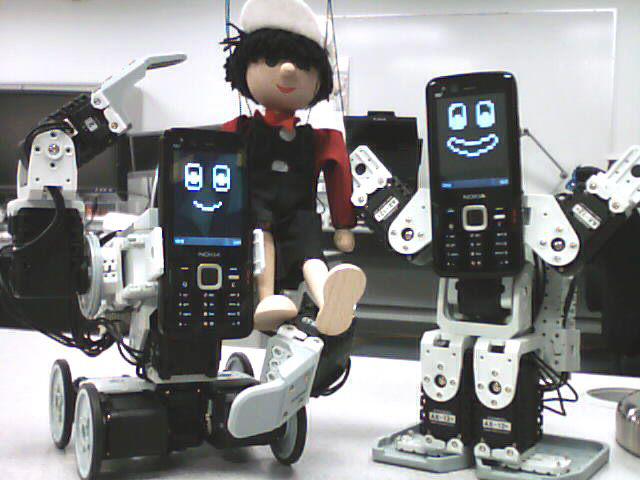 Check out more videos of his robots on YouTube!